Showing posts from January, 2018
Show all

Life Outside the Box 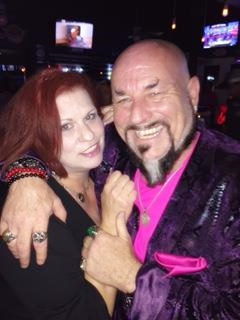 Life Outside the BoxWherein the Wicked Witch Confesses that she Neither Cares for nor Understands "Normal" People. Or Maybe They Just Suck?
Regular listeners, old friends, and readers of mine know that with the exceptions of  dealing with family and Church of Satan functions I haven't been social/out and about for almost a decade.  That changed in July when I determined that being sick and housebound was about as much fun as a lye douche.  My Magister was thrilled to introduce me to new friends, and we  have had a lot of fun.  I've made some truly valuable acquaintances , and I look forward to expanding those into true friendships.  I'm excited about life.  I'm motivated.      Still, it is hard, when dealing with normal folk, to forget why I isolated myself to begin with.  I have long fought against the idea that anyone's workplace, social group, bar scene, or team somehow has more "drama"  than any other.  My experience is that if there a…
1 comment
Read more

4th Annual Wicked Witch of the Year Nominations and Instructions

January 06, 2018
4th Annual Wicked Witch of the Year Nominations and Instructions Wherein the Wicked Witch Confesses that
Demanding  25+ Questionnaires Sounds a Bit Too Lock, Step, Lock, to Her,
Bordering on a Kind of Toxic Herd Corporate Feely Thing
She Cannot Justify FUCK THOSE QUESTIONNAIRES! Essays, Anyone?

Once it came to my attention that this process was a colossal pain the ass I consulted my three wise women, blew those ladies off pretty seriously, and made an executive decision. I want an essay per nominee.  The nominee can write it, or have it done by a proxy of her choice.  This is because a few of those who made nominations are hard of reading, and broke rules by nominating some who weren't CoS Members in Good Standing---which has led me to two of my least favorite emotions, the first being humiliation of myself, the second being the need of potentially humiliating someone else. This is not the fault of the nominated witches, and for that reason I will not publicly single anyone out…
Post a Comment
Read more
More posts