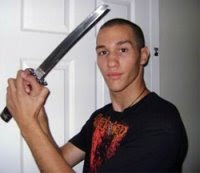 This story is just disgusting all the way around.

The story of a fucked up kid killing a fucked up man and a fucked up newspaper supporting fucked up friends and allowing our religion to get shit on for it.

As a previous Brooklyn resident, a native New Yorker, and a spokesperson for the Church of Satan I disturbed that you'd use the headline chosen to tell the story of a viscious and disturbed teenager and the death of a perverted junkie pederast.
Given all that tawdry proven information one must wonder why you'd choose "Satanism" as an angle to draw readers.? Are your readers so jaded that pedophilia, internet seduction, drug abuse and brutal murder aren't quite interesting enough?
As a teenager Katehis was ineligable to join the Church of Satan. His actions further demonstrate that he was not considered a Satanist by any current legitmate or academic or philosophical or religious standard. What is obvious is that he was a Christian Heretic, a Christian devil-worshipper, totally accepting of the Christian mythos and opting to support the anti-Hero. That is not Satanism, which views Satan as merely a metaphor and would forbid Katehis' actions.
However it is equally disturbing that everyone from the Mayor to Curtis Sliwa are willing to defend Weber, who's sexual preference is not an issue, but his decision to include underage boys is a Satanic sin, and one would have thought a mainstream one!
Perhaps it is easier to allow the Satanic label to stick on the murderer than to have the pedophile label attach itself to the friend of so many "normal" folk.
Magistra Ygraine Mitchell
at August 06, 2009

At least they put Satanist in quotation marks.

You nailed it in your response. It's disgusting.