This One Is Mine

To a Relationship with Love

and a Real Hatred of Cancer 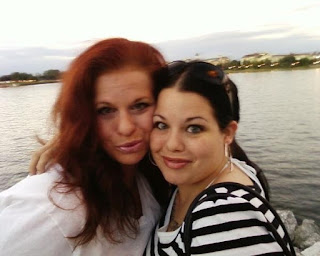 
There is a myth that Satanists are capable of only hate.

It is a myth based on the Abrahamic sanctimony and arrogance that insists only an imaginary being can bestow the ability to love.

Nature via evolution, bestowed the ability to love.  Were it not so no one would endure the complete pain in the ass children are.  We are genetically programmed to love our offspring, and I would venture a guess that we Satanists, because we refuse to suppress hate and all other emotions, are even more deeply loving than most.  Our love isn't for everyone because we were told it should be.  Our love is discriminating, and as result, true.

I love all my children.  I have 5.  They are all adult, the youngest due to turn 25 next month.  I have 3 grandchildren and a stepson who I love, as well.  It is completely fair to say I'd run into a burning building, take a bullet, or cream the living shit out of anyone, who posed a danger to them.

There are many days, I am unashamed to admit, where I do not necessarily like them.  They are human beings who I raised to think and speak for themselves which leads to the often awkward situation where we disagree, or they do something I find unacceptable.  It never changes the love part.  Even more importantly I have found that I would like my kids even if they weren't my kids, most of the time, which is a damn site more than I can say about 90% of my acquaintances.

When my first child, Shannon, was born, I was extremely young, and she was the first infant I had ever held.  I knew damn close to nothing.  There was no internet, doctors were still mostly of the mind women were to be placated and dismissed, and the magic of instinct would take over, which, it turns out, was mostly true.  I knew immediately how to hold her, what her cries meant, and that if I didn't get some fucking sleep I would probably jump off a cliff.

Luckily I was married to the oldest of four siblings, one born when he was fourteen, and he had the logistics pretty well in hand.  My daughter and my then husband (and current oldest, dear friend,) did something it took much more time for me to do.  They bonded, like from the moment she was born.  Today the phrase "daddy's girl" has some unpleasant connotations, but in 1982 I watched, in a micro-second, an infant and her father fall in love.  It was beautiful, and it turned out I was a bit resentful.  Over her childhood their bond just grew stronger, as well as mine with her, but theirs was noticeably deeper, and the petty part of me was jealous.

Almost 4 years later I gave birth to my second daughter.  Whether it was the morphine wearing off, or just a moment of unguarded honesty, when Chelsea was handed to me, I looked her father in the eye and the first words out of my mouth were "This one is mine."  And she was, and she has been, since that day.  I do not love Chelsea more than her siblings.  Like each of them, I just love her differently, but if I were to pick the one trait I most love about Chelsea it would be her unflagging courage.

Everyone says that a person facing cancer is brave, because they are.  The fact that they don't choose to give up and off themselves is proof enough, because the uncertainty alone would send a weak person directly to the razor blades.  Chelsea, however, has spent a lifetime being brave.

Although she was a normal sized baby, Chelsea was always tiny for her age.  Once when taking a car pool trip, 12 year old Chelsea was asked if she needed a car seat?  She was not amused.  She is barely 5 feet tall, and as a kid who looked like she was in third grade when she was in junior high, she was an easy target.  Add to that her mother was the locally famous witch, and she had more than her fair share of bullying.  Let me assure you, that little girl can scrap.  Any number of suspensions will support this contention.

Equally brave was choosing to avoid religion in a household where that was bread & butter.  She didn't disdain or demonstrate contempt, but held onto her own experiences and conclusions.  Briefly she claimed to be Catholic, cause let's face it, if you were my kid and wanted to rebel you'd be a Catholic Republican.  That was mercifully brief, but I never challenged her on it.  If you teach them to think you can't bitch about the results.

But the real hallmark, the day I realized my kid was better than me, smarter than me, BRAVER than me, was the day I watched her, just 15 years old, stand in a courtroom, in front of a house packed by her opposition, and told the truth about her abuser.  He laughed at her.  His family sneered and made threatening faces and gestures.  She held her head high.  She sent him away for 10 years.

I have gotten a bit of flack from the #me,too! movement because I am against non-disclosure agreements and private settlements.  I KNOW how hard it is to tell.  I know how much can be at stake--Hell, we all thought we were going to be killed by this monster, so I understand the fear.  I also know the only way to stop an abuser is to lock his ass up.  I don't know how many young girls Chelsea's bravery saved that day, but I do know exactly how many were abused due to Chelsea's strength for the following 8.5 years: ZERO.

'that little girl should be wearing a cape.

That young woman has since worked like a dog in the hospitality industry.  She has already gotten an associates degree, and is working, full time, on a degree in International Relations, where she is currently, and frequently, on the Dean's List.  She is a devoted mother to Ava.  She has an amazing and kind boyfriend.  She is sarcastic, funny, razor sharp, contemplative, and stunningly beautiful.

Then, out of nowhere, she gets a rare form of lymphoma, that might kill her.  If it doesn't kill her, and it won't goddammit, it will leave her in huge amounts of debt and the need to start from scratch.  Now me?  I give no shits about debt and starting over is essentially my way of life, but Chelsea?  She has done everything right.  She has followed the path of responsibility and adulted even when the rest of us put that annoying shit on hold.  She may be mine, but by any quantitative measure she is better than I'll ever be.  If possible I love her even more for not being me, while still being mine.

So when I hear some fucker try to tell me that without God I can't know love, I am inclined to demonstrate just a little hate.  This latest assault on Chelsea has only proven to me that there is no God, at least not one who is just or kind.  If there was I'd be sick.  If there was I'd be able to bargain and beg, please, please, take me.  I'm cool. I can call it a day.   The only thing I would ever pray for is the ability to go before any of my kids.  Sadly, he isn't there or doesn't care.  I have instead relied on love.  Real love.  The love shown by action, deed, and word from my family, friends, and most of all the "loveless" members of the Church of Satan.

To think that my love is less because it isn't given the seal of approval by, if actions speak louder than words, some sadistic puppeteer, is more than just insulting.  It is grotesque.  To think that the people in the Church of Satan who have overwhelmingly shown support for my daughter, not even a member, through this battle with cancer, and years ago when she stood up and protected a decades worth of potential victims, ti think we don't respond to love and kindness, to loyalty and decency, is a myth worth shattering.

I hate what is happening.  I hate the bureaucracy, the judgmental nature of humanity, and I hate every cruel fucker who had the resources to beat cancer without resorting to begging for help.  I have a whole heapin' helpin' of hate, and my hate is real.

And yet I know, it won't be my hate that wins this.  It may prop me up, or give me bursts of strength, and I welcome that fire, but this particular battle will be won by those who loved science enough to become doctors and researchers, those who through nature and nurture love my kid, and the love of the most unfailing support system I have known in my life, the members of my Church.

Pity the next righteous twat who tries to tell me we don't love.  I may never be able to prove to them the depth of my love, but I can sure as shit confirm their worst fears about the impact of my hate.

The opposite of love isn't hate, it's not caring. You care about your family that's true love and strength.